Posted on March 19, 2013 by savtravelingeverywhere

After a delayed flight (Thanks to Pranab Mukherjee’s plan to fly to Chennai), our plan to hit Kandy as soon as we land in Negombo went down the drain.

After landing, we directly went to the travel help desk and asked for details as to how to get to Colombo from the airport. We were informed that there was a shuttle bus which took us to a bus station near by from where we could connect to Colombo. So with a map, we took off to the shuttle service stop. While waiting there, we met a few backpackers like ourselves who did not have an idea as to where to start. Our plan was to hit Kandy and many of them were going North East to Trincomalee. We were in two minds as to whether we hit the beach at Trincomalee or continue to the Hill country. After deciding that a 12 hour journey to Trinco would be too long, we bid our goodbyes and hit the bus to Colombo.

After reaching the bus stand in Colombo, we realised that we were completely lost! We had no idea as to which part of the city would be safe to stay at and also we had to ensure we did not spend too much on that one night accommodation. So we walked for a couple of miles talking to the locals who kept informing us that there were hotels up ahead, but all we could could find were dingy lodges. After some more walking, somebody informed us to look for hotels near Galle Face. So we took a bus which took a very long route and we reached somewhere close to Galle Face. It was already night and we inquired at a  couple of hotels, but the rates were just ridiculous. At this point of time, with sore feet after all the walking and traveling, we were on the verge of losing it. We decided to take a Tuk Tuk and get to a hotel. Any Hotel!! The Tuk tuk driver who agreed to take us to a hotel was not so fluent in English. It was quite hard to explain to the guy that we were looking for a budget hotel just to spend that one night in Colombo. After riding around for a bit, he took us to a hotel which was a off the main road in a dark and kind of lonely road somewhere in the city of Colombo and we had no idea where. I went to the front desk where the guy said that he would accommodate us at 2000LKR which was well within our budget. But yet I did not want to spontaneously agree with the price he mentioned and after informing him that we will be checking out early next morning, he settled at 1500LKR. Not bad for a hotel with decent facilities and free Wi-Fi. After paying off the Tuk Tuk driver, I hit the shower. Ah what a pleasure. A journey that started in Bangalore to Chennai via train and then a morning in Chennai followed by a 40 minute local train to the airport and then the delayed flight to being lost in Colombo, the last 24 hours was just nerve racking and that hot water shower that night, was one of the most relaxing showers I had ever had. After changing up, went to a restaurant near by. Had some delicious food and then headed back to the hotel where we laid down on the bed and fell asleep before I could spell SLEEP. This was just the beginning of our journey which was going to take us to across Central Sri Lanka all the way to the South. But as of now, my sleep was the most important factor and I ensured I got enough of it. We had to wake up early to take the train to Kandy. And we didn’t even know what time it was going to leave Colombo. So have to wake up early!!

Posted on March 18, 2013 by savtravelingeverywhere

We reached Chennai early in the morning at around 7 on the 8th of Septmeber, 2012 and immediately called the guy who was going to exchange our currency. He informed us to go to another place somewhere in TR Nagar. After haggling with a lot of auto drivers (150-200 rupees for a 50 rupee ride!!), we finally took a rick at the right price to where we had to go. Reached the place and went to a vegetarian restaurant for breakfast. In the mean time, our currency guy came and got the Indian rupees converted to Sri Lankan Rupees. After breakfast, we went to the Park Station to take the local train to Trisulam station. It costs just Rs.12 and it takes only 40 minutes as against probably Rs.1500 and 90 minutes in a taxi. Got to the airport and here I entered an airport for the first time in my life!! Wow the excitement 🙂 And that is when we realized that we had forgotten to take print outs of our visa!! Well we actually did not forget, but our visas were still in pending status. We were informed that we can go to the immigration in Sri Lanka and get it approved. But either ways we wanted to check. Called a friend in Bangalore who informed us that the visas were approved. YAY!! But we had to take a print out. So we had him send the visas to the Western Union employee’s email in the airport who was really helpful and gave us a print out of the visas. Went through the customs check and all that jazz and now we are currently having some food and waiting for our flight to Sri Lanka. See you there!! 🙂 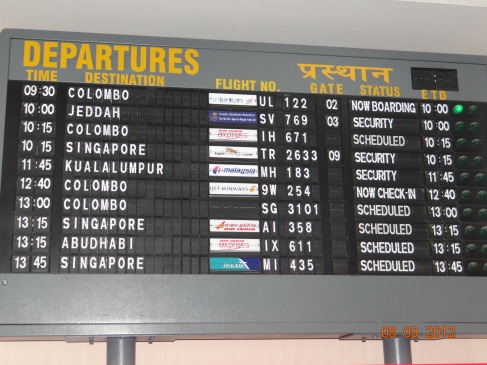 Posted on March 17, 2013 by savtravelingeverywhere

I always loved traveling. There were very few months in the last 7-8 years where I hadn’t been on a holiday. Even if it was a weekend break. And I always had this dream to backpack in another country. Having covered a lot of places in the South of India, an international trip was on my list and I badly wanted to do it. The options that I had in mind were Thailand, Nepal, Bhutan or Sri Lanka. I was hell bent on doing a trip in the year 2012.

It was a hot summer day in May when I was sitting in office taking a look at the destinations I was planning to visit. Browsing through the internet, I came across this offer for flight tickets to Negombo from Chennai at dirt cheap prices. I immediately walked up to my boss’ desk and told him that I am going to Sri Lanka and I am going to book my flights. So I needed him to approve my leave. Being a travel lover himself and working in the travel industry, he immediately obliged (there was the catch that I could not take any leaves till the trip. I did not mind). I went ahead and booked my tickets through Samantha,  (we were on a break at that point of time and it was turmoil in my personal life. Needed this trip!!). She gladly helped me with the flights. That night I could not sleep. My head kept revolving with the thoughts of my trip to a country which was still suffering from the aftermath of a war.

A couple of months later (the break was done and Sam and me were back together), Sam who always wanted to join me on the trip, booked her flights. I found another awesome offer online and we booked our tickets. So now it was the 2 of us who were going to go together. Man this is exciting!!!

Bangalore to Chennai. The longest night!!

Posted on March 17, 2013 by savtravelingeverywhere

We started our trip to Sri Lanka on the 7th of Sep, 2012 from Bangalore to Chennai. Having made up our minds to cover as much as possible in Sri Lanka with the lowest possible budget, we booked our flights from Chennai since it was almost half the rate of what it would have been had we booked our flight from Bangalore. After a couple of beers, we caught the rickshaw to the Cantonment Railway Station in Bangalore from where we were to take our train to Chennai. The thought of my first flight and my first international trip and that too backpacking with my fiance kept me on my toes. As expected the train was late by about 20 minutes and that was a little irritating because we just could not wait to get to Sri Lanka. That night in the train was the longest night. Neither of us could wait to  board that flight that would take us to the destination we always spoke of.